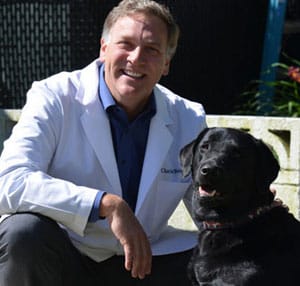 Dr. Weiss is the owner and primary veterinarian of Bradley Hills Animal Hospital (established in 2001).

He grew up in Long Island, NY where he began his veterinary medicine career at 14 years old as a Kennel Assistant at the South Shore Animal Hospital. Dr. Weiss worked his way through the University of Missouri in Columbia as a Veterinary Technician, living in a small apartment attached to a local animal clinic. After earning his D.V.M. from Missouri in 1990 he relocated to the Baltimore area to practice veterinary medicine and hone his surgical skills at a 24-hour clinic, often performing 20 surgeries each day.

In 1992 Dr. Weiss became an associate veterinarian at The Potomac Animal Hospital in Potomac, MD. While he mainly treats dogs and cats, during his time at Potomac Dr. Weiss developed an expertise in treating ferrets, even pioneering cryo and laser surgical techniques for the removal of ferret adrenal gland and pancreatic tumors.

Dr. Weiss is committed to practicing state-of-the-art medicine yet he believes listening to client concerns and treating each patient with gentle compassion is the key to practicing the highest-quality of veterinary medicine.

We just wanted to thank you for all the support and loving care that you've given to our babies over the last 4 years. Ferrets are truly wonderful and amazing little creatures that totally steal your heart. We're so glad that there are people out there like you who are looking out for them. - Wendy and Scott